Traditional storytelling is as old as humanity itself!

We know the ancestors of all humanity evolved in Africa, so it is safe to say that story telling also originated in Africa. With time, the art of story telling developed as humans migrated to different regions of the world.  Even today, African narratives are character-building tales with morals told through legends, songs, dances, myths and riddles.

But let me give you a brief historical background to the origin of humanity, the migration patterns and how story telling and oral traditions have been sustained.


Africa is where ALL humanity is believed to have originated. Historians have traced the periods in which humans moved from present day Africa to the Mediterranean, Europe, Asia, America, and finally New Zealand, which is believed to be the last habitable land mass colonized by humankind. Genetic drift and adaptation that has happened in the time since they migrated, contributed to the difference in appearances.

According to genetic evidence and the most recent fossil discoveries, groups of modern humans first moved across the Sinai Peninsula about 180,000 years ago. Innovative talent carried our species into every exploitable niche. We were living in the eastern Mediterranean region by 90,000 years ago and reached Asia and Australia by 40,000 years ago and Europe by 30,000 years ago.

During ice ages, sea levels were as much as 425 feet lower than they are today, so there were land bridges connecting many of today’s islands and continents. Humans walked across what is now the Bering Strait from Russia to Alaska by 15,000 years ago, and reached the southern tip of South America by 12,000 years ago.  Polynesian voyagers even colonized New Zealand at least 700 years ago.

So, anyway, back to the story telling:

The stone age is believed to have been significant in stimulating development of of the modern human cognitive abilities. Olduvai Gorge in Tanzania is one of the places where deposits of stone tools over one million years old were found. With the stone age came human mastery of fire, and many stories in traditional African societies were told around fireplaces.
Traditionally, story telling has been a way of sustaining heritage and traditions, and communicating knowledge. Stories were told around themes of love, conquest and death, involving discipline, work ethic, leadership, and other morals.

The decline of the art of story telling in Africa was influenced by foreign art forms. This is not to say that those forms are bad, but rather that it has been difficult to balance the traditional art with books, movies and television, especially when those media are strategically marketed as superior. This identity crisis is evident in many indigenous communities, including those beyond of the continent of Africa.

Unfortunately, story telling and folklore has become endangered because its value to the community has been lowered enough to not be preserved in many urban places. It has been replaced by Disney fantasies for both children and adults. Parents and communities have lost the skill of telling stories to their children.


Here is a story from my mother’s tribe.

Once upon a time, in a kingdom far away, there was a spring where there lived a songbird that would distract people who went to draw water from the spring. The moment someone would put a water pot on their head to carry it home, the bird would sing so beautifully, shaking its beads and cowrie shells, and the person would look back to see it, drop their pot and break it.

When the people reported to the king, he laughed out loud and said that any man who drew water from that spring and brought an intact pot of water to him, would have his beautiful daughter for a wife.

Many men tried, but whenever they would put the pot of water on their heads, the bird would break out in its song


One day a deformed person, akakokolo, came to visit the King’s family and declared his intention to marry the girl.  He told them he had heard all about the bird, but was determined not to fail like the previous people. The parents and their daughter laughed so hard, but the akakokolo stood his ground and pleaded to be given a chance.

“Do you promise to give me the girl if I succeed in bringing back the pot of water?”

“Of course we will keep our part of the bargain, but we know there is no way someone like you can do this. Worthy men have failed. We do not want to waste our time, but for the sake of amusing ourselves, we will give you a pot.”
As soon as the akakokolo got the pot, he set out for the spring. On getting there, he filled the pot hurriedly and put it on his head. No sooner had he started moving, than the bird started its song:

The King, his wife and their daughter were still laughing when they suddenly saw in the distance, the akakokolo walking toward them with the pot on his head. Their laughter froze on their faces. They noticed the bird was still flying behind the akakokolo, trying to distract him. He finally got to the family, gently lowered the pot of water to the ground, and asked for the girl’s hand in marriage, as promised. The girl and her parents cried and cried, but a promise is a promise, so they had no choice but to give the girl to the akakokolo to be his wife.

The moral of this story was to caution against the arrogance of despising and underrating people who may look different in appearance, and to emphasize the importance of not judging a book by its cover. Children are also reminded that following a task to the end without letting themselves be distracted, pays off.


on January 27, 2018 No comments:
Email ThisBlogThis!Share to TwitterShare to FacebookShare to Pinterest


Historically, Africa has been known for producing art and craft from the available raw materials and historical influences.

The crafts from this region are distinct and include, textile, cultural artifacts, pottery, weapons, paintings, among others.

Different work, may at times represent different tribes, clans, regions or even events such as marriage, harvests, initiation ceremonies and celebration.

Some of the hand crafted items include mats and baskets. Often times, the same raw materials are used to make these two items.  Dried palm leaves, raffia and  reeds
The various mats and baskets were elaborately woven together using dried, dyed palm tree straw fiber.

One needs to note that these raw materials are bio-degradable and therefore kind to the environment. It is no wonder that  despite much of  being Sub-saharan Africa, being rated poorly and "isolated", on the global economy, it boasts of marine and terrestrial eco-systems that are endowed with unique tourist attractions.


The photo abovet shows a gourd that was specifically crafted to store ghee that had been freshly churned or for storing food.

Omugamba is a collection of cultural pots given to an Ankole bride, at her traditional wedding day. It comprises of ebyanzi (åmilk pots), enkyeka (gourds), pots for storing ghee, herbs , a small pot for storing traditionally made moisturizer “amajuta” and a pot used to burn scented herbs in the couple’s bedroom.

Many of the traditional African instruments in the African societies, are made out of animal skin, wood, reeds, seeds and other products of nature. 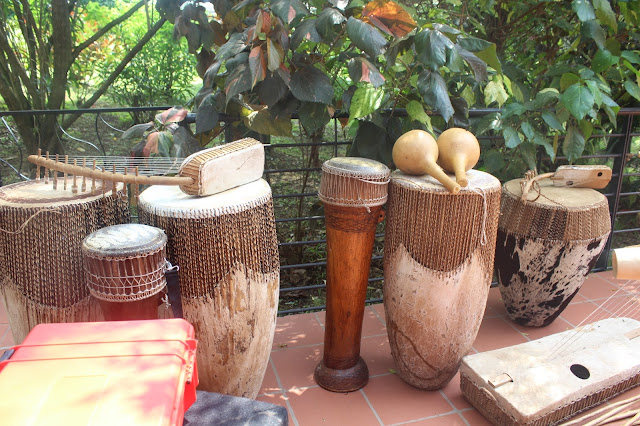 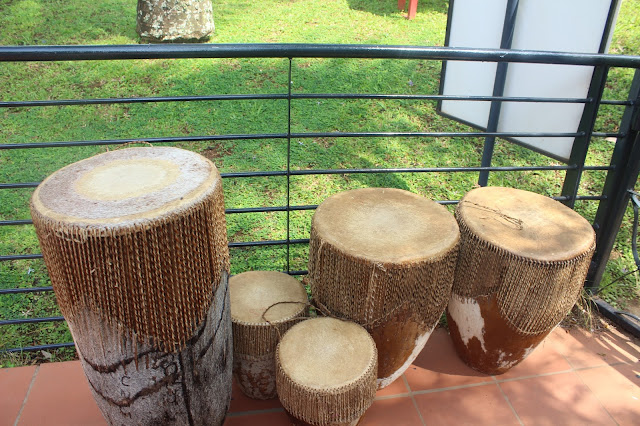